Top 10 Things to Do on the Venice Lido 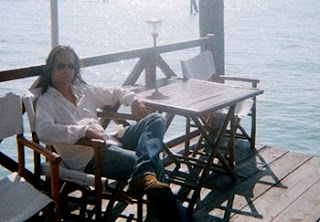 My latest book, The Venice Lido, is out now, published by Blue Guides. I've visited the Lido regularly for over thirty years. The book is a celebration of its spellbinding history and enduring charm - and of the considerable amount of fun that can be had here. Here is my personal list of '10 Things to Do' on the Lido which I hope you will find useful and inspiring. The annotated google map on the right contains a list of sites that are either mentioned in the book or that I've enjoyed and can personally recommend. The eleventh thing to do would be to buy my book which, I am told, is rapidly becoming the beach book of choice this summer. I am always interested to hear about good or bad experiences on the Lido - restaurants, bars, nightclubs, sites of historical interest, exhibitions, concerts. I can be reached by email: . See my Guardian article for ideas about children's activities in Venice.
1. The Beach: The Lido has always been celebrated as a retreat from the sometimes over insistent beauties of Venice. As the the English sculptor Lord Ronald Gower put it, ‘When jaded with too much sight-seeing, one gets a longing for unadorned nature; then how easy to cross to the Lido, and to follow the tide for miles along those sands on which Byron loved to ride..." Though there are rather fewer instances of unadorned nature than there were in Gower's day, the Lido's beaches have considerable charm (and have been awarded the all-important Blue Flag). There are number of ways of enjoying them, all depending on budget and personal taste. The sybaritic option is to buy a non-resident's day pass to the Hotel Excelsior's private beach. Prices range from 100 Euros for a sunbed and parasols for two people to several hundred Euros for the use of a capanna, one of the distinctive beach cabins. A more economical option is a day pass to one of the public beaches. Again, as with the Excelsior, there are various facilities available ranging from a simple sunbed and parasol to lockable changing rooms and mini cabins. The Blue Moon (see map) is a particularly enjoyable beach complex. For cheap and cheerful  self service meals (see map) on the beach, look out for Il Reef Bar, the Beach Pagoda and the Beach Rotonda Lounge. See the map for a regularly updated overview of the best venues.

2. Children: The Tennis Club Ca del Moro (see map) is an ideal place to take a lively young family that may have grown a little bored with the cultural rigours of Venice. There are indoor and outdoor tennis courts, a swimming pool, barbecues and many other sports facilities. See map for further details of other attractive sports of child-friendly venues including riding stables, sub-aqua, shooting, the Dingo cat's home (you may visit and adopt a cat - though you need not take it home with you) and the Planetarium. See also my article in the Guardian for a few ideas about how to entertain children in Venice. Remember that on the Lido the sea is warm, shallow, safe and for the most part unplagued by jellyfish - a paradise, therefore, for children of all ages.

3. Cycling: Your Lido hotel may have in-house bicycles for hire. Failing that, there are several bikes-for-hire shops near the vaporetto station and on the Gran Viale S M Elisabetta. A good site for cyclists is http://www.lidoonbike.it/.  Destinations: the Pineta degli Alberoni - the pine forests of Alberoni - are a protected nature reserve at the southern tip of the Lido. The forest blends gently into the dunes of the Alberoni beach, as do a small but significant cluster of gay tourists and naturists in high season. You can take the ferry over to Pellestrina and head as far south as Chioggia, though this requires considerable stamina. Another option is to hire a motorbike and tear around the Lido pretending you're Johnny Hallyday - this is a less exhausting and somewhat more glamorous option than cycling.

4. Golf: Afternoon tea, lunch or dinner at the historic Circolo Golf Venezia, the Lido's golf club at Alberoni,  is a delightful experience, whether or not you are a golfer.  The agreeable club house has photos of the club's illustrious patrons over the years - Henry Cotton, Bing Crosby, the Duke of Winsdor - and cases full of tarnished trophies. For golfers, the 18-hole course is one of the most interesting (and, with its views of the Adriatic, picturesque) in Europe. It's worth taking up golf just to enjoy the view. See http://www.circologolfvenezia.it/ for details of the various golf packages on offer. See this excerpt from The Venice Lido for an account of Hitler's visit to the golf club during which a Jewish pastry chef memorably poisoned the coffee.

5. Flying: The Aeroporto Nicelli, home to Venice's flying club. Transfers to the Lido from Marco Polo airport to the Lido can be arranged, though this is, perhaps, something of an indulgence. It is possible to book 30-minute helicopter flights over Venice or to take lessons in parachuting. There has been a landing strip on this site since before the first world war, though the present art deco building, recently restored, dates from the Thirties. During the first world war Venice was under threat from aerial bombardment by Austria and was the HQ of Venice's heroic 87th Air Squadron, commanded for a time by the poet Gabriele D'Annunzio, a few of whose wartime exploits are recorded in The Venice Lido. The bar and restaurant of the Nicelli are excellent. It is a popular venue for classical concerts. The club can be hired for parties and receptions of all kinds.

6. Self Indulgence: Spend the afternoon enjoying a luxurious 100-minute Thai detox massage at the Wellness Spa of the Grande Albergo Hungaria Ausonia on the Gran Viale. It is tempting subsequently to undo the good work by consuming a bottle of champagne in the hotel's elegant bar or gardens. Sometimes the pool is open to non residents - call in and ask the concierge. The somewhat louche photograph of me at the top of the page was taken on the private jetty of the Hotel Villa Mabapa on the Riva San Nicolo at the northern end of the Lido towards the church of San Nicolo. The garden bar and restaurant of the Villa Mabapa are pretty - a good strategy here is to order prosecco before dinner and consume it on the jetty while watching the sun set over Venice and the Euganean hills. Venetian sunsets are celebrated in my book - and have been warmly celebrated over the years by a number of distinguished tourists including Byron, Shelley, Housman, Wagner and Lord Ronald Gower. The Excelsior and the soon to be reopened Hotel des Bains are agreeable venues for afternoon tea and drinks. Club 22 at 22 Lungomare Marconi is my nightclub of choice. Dine at the unassuming but unimpeachable Tavernetta in the Via Morosini.

7. Cemeteries: Visit the extremely beautiful ancient and modern Jewish cemeteries on Via Cipro at the northern end of the Lido. The modern cemetery is open daily to the public, as is the Catholic cemetery adjoining it. The ancient cemetery is viewable by appointment only - tours are conducted by Aldo Izzo, the charming head of public relations for the Jewish community in Venice. There is a charge for these tours - the proceeds go towards the ongoing restoration of the monuments - and it is a source of considerable satisfaction to me that last year the only people to get in for free were me and Barbra Streisand. See their website for details of opening hours and of how to book tours. A chapter of The Venice Lido charts the troubled history of the Jews in Venice, the Nazi occupation and the history of the cemeteries. In Judaism cemeteries are referred to euphemistically as 'houses of the living' - this is an apt term, since the beauty of the Lido cemeteries and of their memorials is an undeniably moving and revitalising experience.

8. Picnics: There is a book yet to be written with the slender budget in mind, The Great Supermarkets of Venice and the Veneto. Stock up with food and wine at the Billa supermarket on the Gran Viale S M Elisabetta. Go early in the morning to avoid queues, or visit an off-the-beaten-track supermarket such as the Co-op marked on the map. The Venice Lido explores the history of the Lido as a bathing resort, beginning with the Luni de Lio ('Lido Mondays') of the early nineteenth century, when Venetians would visit the Lido every week to walk, picnic, bathe and flirt. The Lido was regularly visited by a number of distinguished tourists, all of whom loved to spend time unwinding in a variety of different ways on the beach. These included Lord Byron, Henry James, A E Housman, Winston Churchill, Cardinal Pietro La Fontaine, Oswald Mosley and the Duke of Windsor.

9. Churches and Museums: Visit the church of San Nicolo al Lido, for centuries an important focal point in the religious and ceremonial life of Venice (see map). There was a banquet here every year following the sposalizio, the ceremonial 'marriage' of the Doge of Venice to the Adriatic. After the banquet, the merchant ships would set sail for the east and the spire of San Nicolo would be the last Venetian landmark seen by sailors at the outset of their voyage (a chapter of The Venice Lido explores the history of the sposalizio and the role played by the Lido as a backdrop for full-scale ceremonial and celebration of this kind). There are spectacular 17th century choir stalls carved in walnut. Other religious sites include the Tempio Votivo (the war memorial, the imposing copper-domed edifice near the vaporetto station), Santa Maria Elisabetta and Santa Maria Assunta (Malamocco). See map for museums and other sites of cultural interest, including the museum of Malamocco that has a permanent exhibition devoted to various aspects of the Lido's history.

10. Lido Architecture: The Comune di Venezia has published a useful and everexpanding online list of important buildings on the Lido, with maps, photographs and plans together with biographies of the architects, designers and patrons. The site is of enormous use for planning ‘Liberty’ walking tours of the Lido. Most structures listed, with the exception of the hotels and civic buildings, are closed to the public, though their façades and gardens are for the most part easily visible from the street. Doors, gateways, cornices, even bell-plates and post-boxes, are often textbook examples of Art Deco and Art Nouveau styling and design. ‘Liberty’ is the wholly inadequate catch-all term used in Italy to describe the hotels and villas built by architects and their patrons from the beginning of the 20th century. Owing little if anything to the influential English designer Arthur Lasenby Liberty, from whom the name is taken, they are exuberant fusions of a great many styles: northern European Art Deco, Veneto-Byzantine-Moorish revivalism, Rationalism humorously tempered by Art Nouveau flourishes. There are, on the Lido, curiosities that elude classification. One such is a hotel, the Albergo alle Quattro Fontane at Via Quattro Fontane 16, a pleasing extravaganza that resembles a cuckoo clock designed by a mad Viennese Secessionist. A chapter in The Venice Lido celebrates the foundation of the grand hotels and the dramatic spate of building and design that took place on the Lido from the mid-nineteenth century onwards.