Jazz and Negroes: Cole Porter in the Twenties 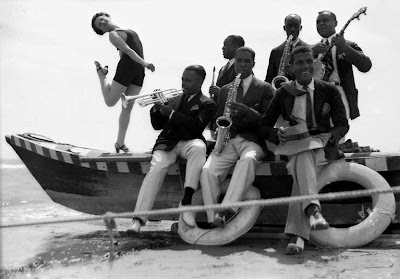 From The Venice Lido by Robin Saikia: Jazz, Negroes and Noah's Ark.

Between 1923 and 1927 the Cole Porters came every summer to Venice where they gave a series of elaborate parties, some staged on an enormous float, permanently moored in the lagoon and known by Venetians as l’arca di Noe, ‘Noah’s Ark’. These excesses were greeted with disgust by Diaghilev, who complained strenuously about the jazz, the ‘negroes’ and the nightclub. In addition, he cannot have been anything but dismayed by another philistine raid on the Ballet Russes’ citadel, Porter’s brief but intense aff air with the dancer and librettist Boris Kochno. Despite Diaghilev’s protestations, the revellers voted with their feet and Cole Porter’s elaborately orchestrated tumulte noire was there to stay: he shipped in the all-black Leslie Hutchinson jazz orchestra to perform at Chez Vous; the legendary black singer Bricktop sang at Jane di San Faustino’s charity gala in 1926; chorus lines of flappers were taught the Charleston on the Lido beach. Some of the more outré fringe performances that took place during Porter’s reign included a ukulele routine by an Indian nobleman, Prince Jit of Kapurthala, and an appearance by the short, stout and irrepressible Elsa Maxwell, wearing a blonde wig and a short, tight skirt, singing ‘I’m a little old Lido lady’. As to Porter’s patronage of gondoliers, it would have rendered gay gondola-chasers like Symonds and Brown speechless, for he routinely employed no fewer than fifty gondoliers as footmen at his parties in the Ca’Rezzonico. In a hothouse such as this, it was only a question of time before ‘Lido’ was rhymed with ‘libido’. Porter duly obliged, improvising a lewd stanza touching on a supposed liaison between the ‘leader of the Big-Time Band’ and the well-known French author George Sand.
Posted by Robin Saikia at 21:08 1 comment: 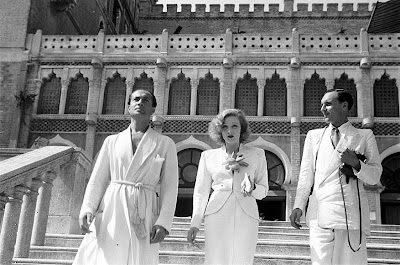 Marlene Dietrich on the steps of the Excelsior in 1937.
Posted by Robin Saikia at 20:40 No comments: This is the first of a series of photographs I will post over the next few weeks to celebrate the forthcoming Venice Film Festival. It shows Marlene Dietrich in 1937, with friends in a capanna (beach cabin) at the Excelsior on the Lido. In September 1937 a somewhat disconsolate Dietrich, recovering from the recent Korda flop Knight Without Armour, was sitting in the Hotel des Bains with Josef von Sternberg. Erich Maria Remarque, the author of All Quiet on the Western Front, came over and asked her to dance. Subsequently, their brief but intense affair restored her confidence. This photo dates from that time. The Venice Lido is in the Amazon Top 10 for Venice.
Posted by Robin Saikia at 15:19 No comments:

All this and Cole Porter too

The Venice Lido by Robin Saikia – review by Vera Rule – this article was published on guardian.co.uk at 22.55 BST on Friday 8 July 2011. A version appeared on p19 of the Guardian review section of the Guardian on Saturday 9 July 2011.

A pocket-sized monograph, with mini-map, on the history of the great prototype beach resort, and so well brought off I expected sand to sift from its pages while I was reading. The evocation of the Lido in winter is especially sharp, that sense of it being (even considering the development thereon) still the wild walk of Venice with the Adriatic storm wrack fetching up along its shoreline. Excellent, if often dodgy, company is kept throughout: Byron of course (and Byron quiet at that, soberly asking that his grave should, like one in the Certosa cemetery, merely implore peace); Diaghilev being rowed to his burial, with the bill settled by Chanel; and many gallant and gay gondolieri-fanciers. Moreover Saikia can separate the didactic John Ruskin from the offduty Ruskin, who temporarily lost his little dog Wisie to the Lido waves, which returned the canine better and wiser. Smashing sections on the local intersection of early airplanes and futurism, and the invention of the film festival, almost casually, in 1932. All this and Cole Porter, too.
Posted by Robin Saikia at 10:03 No comments: