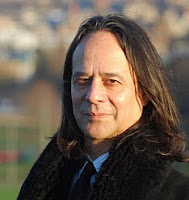 Robin Saikia is a British travel writer and historian based in London. He was educated at Winchester College and Merton College, Oxford and grew up in England, Zambia and India. He is a keen cook, an adventurous traveller, a regular concert-goer and an accomplished classical pianist. He has a regularly updated website and an online diary. He lives in Hampstead and is married to the actress Vicki Carpenter. He has three sons by a previous marriage, Alexander, Sebastian and Inigo. In September 2011 he was appointed writer-in-residence at the Society Club in Soho, London. This year saw the publication by Blue Guides of Robin's latest book, The Venice Lido, the first ever full-length historical and cultural guide to Venice's glamorous beach resort, from its early days as a primitive settlement until its heyday as the setting for Death in Venice and as the venue for the Venice Film Festival. The book charts the antics of many of the more disreputable visitors, including Byron and Oswald Mosley, but also celebrates the natural beauties of the Lido and its symbolic role as the outer boundary of the Serenissima. Robin is a regular visitor to Venice and a keen supporter of the Dingo cat sanctuary on the Lido. He enjoys an ongoing collaboration with the Italian photographer Marco Secchi. In August 2011 they visited the haunted island of Poveglia in the Venice lagoon and made a soon to be released photo documentary. This year Robin invented a lethal, vodka-based cocktail, Death in Venice, which is now available on the menu of the Grand Hotel Excelsior on the Lido. It contains strawberry aquavit, an allusion to Von Aschenbach's fatal snack. It is made with Ciroc vodka in honour of the sirocco, the scorching Saharan wind that ravages the Mediterranean and that features in Mann's novella.

Robin is the author of Blue Guide Hay-on-Wye,  a historical and cultural exploration of the Anglo-Welsh border town famous for its self-crowned king, Richard Booth, for its book dealers, and as the venue of the annual Guardian Hay Festival of Literature and the Arts. Other works for Blue Guides include the Blue Guide Italy Food Companion and the Blue Guide Literary Companion to London.  Further works include The Horn Book: A Victorian Sex Manual (Saucy Book Company, 2008); Munich: A Third Reich Tourist Guide (Foxley Books, 2008); The Red Book: The Membership List of The Right Club, 1939 (Foxley Books, 2010) in which Robin analyses the activities of Captain Archibald Maule Ramsay's 'Right Club', a right wing group operating in London shortly before the Second World War.

PRAISE FOR THE VENICE LIDO

John Julius Norwich: I have enjoyed it hugely - and it has taught me lots that I didn't know.
The Spectator: Warmth, charm and eccentric scholarship
Guardian: Smashing. . .so well brought off I expected sand to sift from its pages while I was reading.
Fictional Cities: This book will broaden your horizons

Strikingly original and idiosyncratic, Robin Saikia's Blue Guide Literary Companion London is a literary masterpiece. This is the finest anthology about London to appear in over half a century. Giles Milton
Pocket-sized and savvy. . .you can trace this city's aspirations and affectations, its mood swings and neuroses. Time Out
Irreverence. . . unexpected juxtaposition. . . interesting historical snippets. . . Blue Guide Literary Companion scores well, with Trollope spilling ink over a pompous colonel and Keats struggling not to snigger as Wordsworth is buttonholed by a tedious fan. Spectator
London brought to life. . .Robin Saikia has taken a fresh approach to London's rich literary heritage. Ham & High

This is a wonderful collection, invaluable to a study of London literature. Eliza Cubitt, University College London

If you want to read about London in all its delightful complexity (and with a refreshing lack of the obvious) the Blue Guide Literary Companion London is the ideal guide. city-lit cafe
So refreshing and non-bland - so many travel guides are neither! Malcolm Burgess, Oxygen Books

PRAISE FOR BLUE GUIDE ITALY FOOD COMPANION
What a heavenly book! Blue Guide Italy Food Companion sits perfectly in the handbag - and I shall sound SO knowledgeable! Victoria Hislop
Libro affascinante. . .autore di charme! Donatella S, Milan
I come everywhere with this book! Florentina D, Venice
PRAISE FOR BLUE GUIDE HAY-ON-WYE
Robin Saikia wrote a very good guide to the book town of Hay-on-Wye and is therefore directly responsible for dozens of the books in my flat. Euan Monaghan, Structo Magazine
I know of no greater master of tone or description. Adam Gutteridge, Toronto Star
PRAISE FOR THE RED BOOK: THE MEMBERSHIP LIST OF THE RIGHT CLUB, 1939
The ideological forefathers of today's far right are systematically thrust into the limelight like superannuated music hall acts and summarily shot down one by one. John Paulson, Right Wing Review